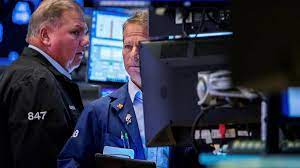 The blue-chip S&P 500 stock index ended the month of May with a
marginal 0.01 percent gain, following weeks of tumultuous trading as
investors questioned the trajectory of US inflation, growth, and
Federal Reserve policy.

Wall Street stocks have whipsawed in May due to economic data and
corporate earnings that have thrown doubt over the health of the US
economy. Grim forecasts from retailers Walmart and Target suggested
that consumers may finally be feeling the strain, while the country’s
census bureau reported that new home sales fell by 17 percent in
April.

The persistence of US inflation has investors pricing in multiple
half-point interest rate rises by the Fed, which some fear may tip the
economy into recession. Consumer prices, despite a small decline in
April, remain at roughly 40-year highs.

After US stocks briefly dipped into bear market territory 11 days ago
— down 20 percent from their recent peak — some investors saw a buying
opportunity.

The S&P remains down 13 percent year-to-date and fell 8.8 percent in
April. On Tuesday the index declined by 0.6 percent.

Signs of turmoil persist in tech stocks, one of the hottest parts of
the market over the past two years. The Nasdaq Composite index ended
May down 2.1 percent. That’s a narrower decline than in April when the
index fell 13 percent, but it remains in the bear market territory,
down 23 percent this year.

In other corners of the market, government bonds dropped on Tuesday
after hotter than expected eurozone inflation data and rising oil
prices intensified questions about how far central banks would lift
rates and how much that monetary tightening would curtail growth.

In Europe, the yield on Germany’s 10-year Bund — a proxy for borrowing
costs across the eurozone — rose 0.07 percentage points to 1.12
percent, extending a bout of selling from the previous session after
German inflation data also came in worse than expected. Italy’s
equivalent yield increased 0.12 percentage points to 3.11 percent.
Yields on longer-dated bonds move with growth and inflation
expectations.

US bond prices similarly dropped, as the yield on the benchmark
10-year Treasury note climbed 0.12 percentage points to 2.86 percent.

Those moves came after data on Tuesday showed that eurozone consumer
price growth reached 8.1 percent in May, up from 7.4 percent in April
and higher than economists’ expectations of 7.7 percent.