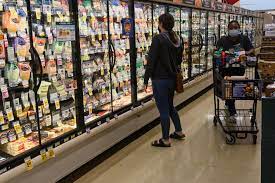 The core personal consumption expenditures price index, the Fed’s
preferred inflation gauge, rose 4.9% from a year ago in April, in line
with estimates and a deceleration from March.
Personal income rose slightly less than expected, but spending beat
estimates as consumers tapped savings.
Headline PCE rose just 0.2%, a sharp reduction from March’s 0.9% increase.

The Federal Reserve’s preferred inflation gauge rose 4.9% in April
from a year ago, a still-elevated level that nonetheless indicated
that price pressures could be easing a bit, the Commerce Department
reported Friday.

That increase in the core personal consumption expenditures price
index was in line with expectations and reflected a slowing pace from
the 5.2% reported in March. The number excludes volatile food and
energy prices that have been a major contributor to inflation running
around a 40-year peak.

The 0.3% increase on a monthly basis was the same as March and in line
with Dow Jones estimates. The monthly gain was held back by a decline
in energy prices during April that has since reversed.

Including food and energy, headline PCE increased 6.3% in April from a
year ago. That also was a deceleration from the 6.6% pace in the
previous month. However, the monthly change showed a more marked
pullback, with an increase of just 0.2% compared with the 0.9% surge
in March.

The data showed that consumers continued to spend but were tapping
into their savings to do so.

“Consumers remained undaunted by inflation last month, strongly
increasing spending and changing their mix to more services such as at
bars and restaurants, and travel and recreation as the weather warms,”
said Robert Frick, corporate economist at Navy Federal Credit Union.
“The spending was fueled in part by higher wages, and also by
Americans drawing more money out of savings, which is a giant
stockpile of at least $2 trillion.”

Along with the inflation data, the BEA reported that personal income
rose 0.4% during the month, a 0.1 percentage point decline from March
and a slight miss on the 0.5% estimate. Consumer spending, however,
held up, rising a better-than-expected 0.9%, though that was below
March’s upwardly revised 1.4%.

Income after taxes and other charges was flat for the month after
falling 0.5% in March.

Inflation for the past several months has been moving at a pace not
seen since the early 1980s. The inability of supply to keep up with
demand has pushed prices higher, fed by unprecedented fiscal stimulus
during the Covid pandemic, clogged global supply chains, and the war
in Ukraine that has sent energy prices soaring and led to fears of
food shortages.

While the lower level of inflation generated some relief in the White
House, gas will be a factor again when the May numbers come out next
month. Prices at the pump have jumped again in May, surging more than
11% from a month ago and 51% from this time last year, according to
AAA.

In a statement, President Joe Biden noted April’s report was “a sign
of progress, even as we have more work to do.”

Responding to the price pressures, the Fed has implemented two
interest rate increases totaling 75 basis points and has indicated
that a series of hikes are likely ahead until inflation comes closer
to the central bank’s 2% goal.

The PCE numbers reported Friday are lower than the consumer price
index used by the Bureau of Labor Statistics. Headline CPI for April
rose 8.3% from last year.

The two numbers differ in that the CPI tracks data from consumers
while PCE is extracted from businesses. The Fed considers PCE a
broader-based measure of what is happening with prices on a variety of
levels.