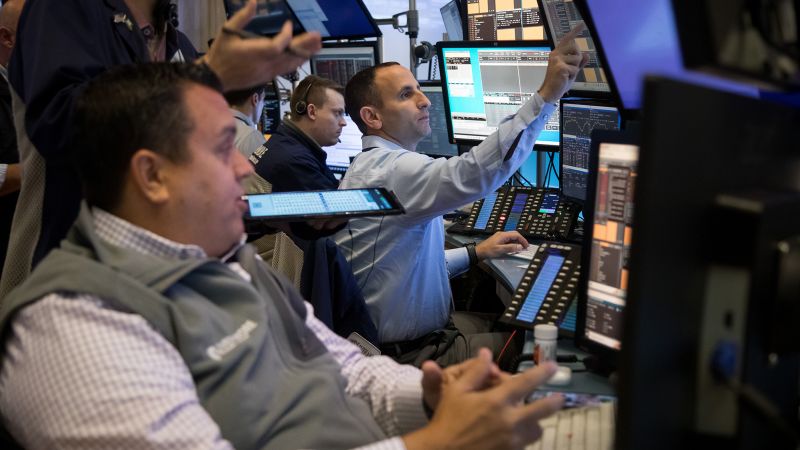 The third-quarter corporate earnings season is wrapping up: We now have reports from about 450 of the S&P 500, or 90% of the index’s total membership.

Results were mostly solid, with companies from Goldman Sachs to GM reporting strong profits. But it’s all about what’s next — and companies’ projections haven’t been as rosy. The Federal Reserve’s interest rate hikes are likely to continue into 2023 as persistently high inflation rattles the economy, and recession predictions abound. Here’s what investors need to know as we head into the final, potentially shaky, few months of the year and beyond.

Earnings have been strong: So far, S&P 500 earnings growth has been better than expected.

As of Tuesday morning, 69% of S&P 500 companies had beaten analysts’ estimates for the third quarter.

American consumers may be feeling lousy, but they’re still spending –at least for now. GM (GM), Coca-Cola (KO), and UPS (UPS) were a few of the iconic companies to report strong profits and sales for the third quarter. We also saw solid earnings from Apple (AAPL) and record profits from oil giants Chevron (CVX) and Exxon Mobil (XOM).

Companies are beating earnings estimates for the third quarter by 1.8% in aggregate, according to FactSet data. But keep in mind the bar was set low, to begin with, and the beat rate is still well below the 5-year average of 8.7%.

Beyond determining market sentiment, tech earnings also offer important clues about where the economy is heading. That’s because the industry is particularly sensitive to inflation, rising interest rates, and a strong dollar.

The economic outlook isn’t great: Even after JPMorgan (JPM) reported an earnings beat, CEO Jamie Dimon warned he was battening down the hatches for recession. “These are very, very serious things which I think are likely to push the U.S. and the world — I mean, Europe is already in recession — and they’re likely to put the U.S. in some kind of recession six to nine months from now,” Dimon said.

More than 50 S&P 500 companies have lowered earnings per share expectations for the fourth quarter, according to FactSet data. That’s compared to the 25 companies that have raised their outlook for that period.

Analysts also aren’t too cheery about the future. Fourth quarter earnings per share predictions have been revised down by 4.3% since October 1, according to Bank of America analysts. That’s 2.5 times more than the typical estimate cut at this point in the earnings season. Bank of America analysts have also revised 2023 estimates down by 3.6%, almost three times more than normal.

“We continue to believe the path of least resistance for earnings estimates for the remainder of this year and into at least the first half of next year is lower,” wrote Liz Ann Sonders and Kevin Gordon at Charles Schwab.

No room for grace: Investors seem to be losing patience for disappointing corporate reports more than usual, which doesn’t bode well for stocks in the final quarter of the year.

Companies that missed earnings and revenue expectations this quarter were punished sharply. Their shares underperformed the S&P 500 by 6.4% the next trading session—that’s the largest in history, Bank of America analysts said on Monday.

The big picture: Corporate America is in the midst of great economic uncertainty, and there’s nothing Wall Street hates more than a lack of clarity. We can expect more market mayhem ahead.

Facebook parent company Meta said on Wednesday that it will lay off 11,000 employees. That marks the most significant job cut in the tech giant’s history.

In September, Meta had a headcount of more than 87,000, per a September SEC filing.

“Today I’m sharing some of the most difficult changes we’ve made in Meta’s history,” CEO Mark Zuckerberg wrote in a blog post to employees. “I’ve decided to reduce the size of our team by about 13% and let more than 11,000 of our talented employees go.”

The layoffs will be company-wide, but Meta’s recruiting team will be hit particularly hard as “we’re planning to hire fewer people next year,” Zuckerberg said in the post. He added that a hiring freeze would be extended until the first quarter, with few exceptions.

The job cuts come as Meta confronts a range of challenges to its core business and makes an uncertain and costly bet on pivoting to the metaverse. It also comes amid a spate of layoffs at other tech firms in recent months as the high-flying sector reacts to high inflation, rising interest rates, and fears of a looming recession reports my colleague Catherine Thorbecke.

Once valued at more than $1 trillion last year, Meta’s market value has since plunged to around $250 billion.

“I want to take accountability for these decisions and for how we got here,” Zuckerberg wrote in his post-Wednesday. “I know this is tough for everyone, and I’m especially sorry to those impacted.”

Investors appeared to approve of the cost cutting measures. Shares of the company closed 5.2% higher on Wednesday.

In a sign that the white-hot housing market may finally be cooling, Redfin is set to shutter its home-flipping business and reduce its workforce by 13%, laying off 862 employees.

Redfin and other iBuyers like Zillow, which closed its home-flipping arm a year ago, have said the capital-intensive business has become unsustainable because the companies were buying homes at higher prices than they could sell them for in the future, reports my colleague Anna Bahney.

About 264 of the job cuts will be directly related to the shutdown of RedfinNow, the company’s instant buying, or iBuying, business in which it purchases a home as-is, completes minor improvements, and resells the home on the open market.

“Winding down RedfinNow is a strategic decision we made in order to focus our resources on our core businesses in the face of the rising cost of capital,” the company wrote in a filing with the Securities and Exchange Commission.

While real estate companies couldn’t seem to expand fast enough during the go-go years of ultra-low mortgage rates and skyrocketing home prices during the pandemic, many are shedding jobs now as the housing market cools and the economic picture becomes more uncertain.

In June, Redfin laid off 8% of its workforce due to the slowing housing market. Through layoffs and attrition, the company said it has now reduced its total number of employees by 27% since April.

“A layoff is awful but we can’t avoid it. We plan to keep increasing our share of the market, but that market in 2023 is likely to be 30% smaller than it was in 2021,” Redfin CEO Glenn Kelman wrote in an email to employees Wednesday. “The June layoff was a response to our expectation that we’d sell fewer houses in 2022; this layoff assumes the downturn will last at least through 2023.”