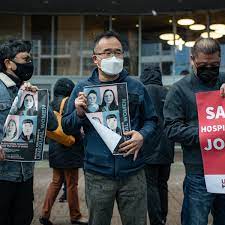 The US private sector added fewer jobs than expected in May as the
Federal Reserve ramped up its effort to slow the economy and cool
inflation.

Private-sector firms added 128,000 payrolls last month, ADP said
Thursday in its monthly employment report. The median estimate from
economists surveyed by Bloomberg saw an increase of 300,000 private
payrolls. The May sum marks a significant deceleration from the April
gain, which was revised to 202,000 from 247,000.

The one-month gain was also the smallest of the pandemic recovery. Job
growth has eased massively throughout 2022 amid a broader slowdown in
economic growth and lingering pressures from the labor shortage.

“Under a backdrop of a tight labor market and elevated inflation,
monthly job gains are closer to pre-pandemic levels,” Nela Richardson,
chief economist at ADP, said in the report.

May saw inflation continue to plague the economy’s recovery. Gas
prices ripped to new records throughout the month, placing more
pressure on households already hammered by soaring costs. The war in
Ukraine continued to roil supply chains. While some signs hinted that
March would represent peak inflation, improvement has been slow.

The persistence of the nationwide inflation problem led the Fed to
escalate its fight against surging prices. The central bank raised
interest rates by half of a percentage point in May, doubling the size
of its typical hikes. The more aggressive strategy aims to put more
downward pressure on inflation, but it also comes with a tradeoff.

Higher rates tend to slow consumer spending and, in turn, overall
growth. After holding rates at record lows throughout the pandemic,
the Fed is effectively pressing the brakes on the hiring recovery in
hopes of curbing inflation.

The education and health services sector saw the biggest increase in
May, with such firms adding 46,000 jobs. Professional and business
services followed with an increase of 23,000 payrolls, and
manufacturers came close behind with a 22,000-payroll uptick.

The information and construction sectors both lost 2,000 payrolls
through the month, echoing prior ADP readings. The former was among
the sectors to see the smallest job losses at the beginning of the
pandemic, meaning information firms had a much smaller recovery to
stage over the past two years. Construction firms, meanwhile, have
been hammered by rising building costs and supply-chain disruptions,
leaving them with additional hiring hurdles.

The ADP report previews the government’s own nonfarm payrolls report
that’s set to be published on Friday. Economists anticipate an
increase of 325,000 jobs through last month, which would mark the
smallest increase since April 2021. They also see the unemployment
rate falling to 3.5%, which would match the five-decade low seen
before the pandemic. Though the ADP report and the government’s counts
have diverged throughout the pandemic, the Thursday reading hints that
May job creation could fall well short of economists’ expectations and
show the hiring recovery slowing dramatically.