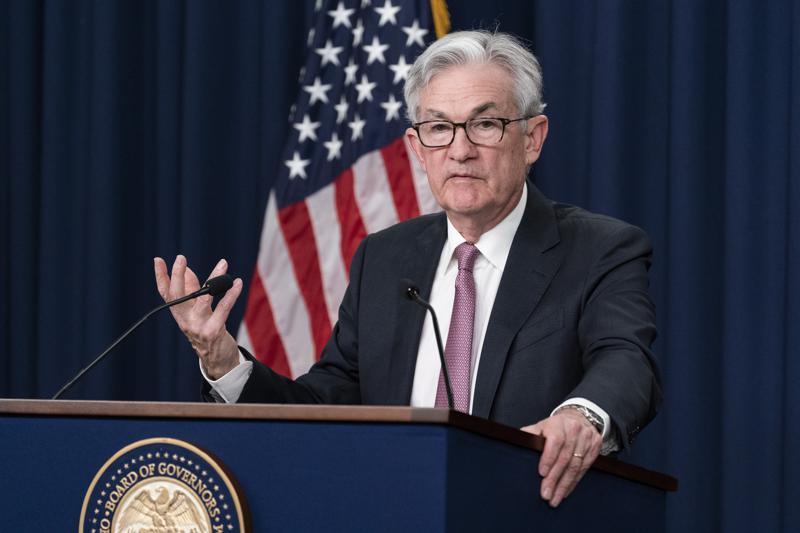 WASHINGTON (AP) — Chair Jerome Powell on Tuesday underscored the
Federal Reserve’s determination to keep raising interest rates until
there is clear evidence inflation is steadily falling — a high-stakes
effort that carries the risk of causing an eventual recession.

The Fed’s increases in its benchmark short-term rate typically lead,
in turn, to higher borrowing costs for consumers and businesses,
including for mortgages, auto loans, and credit cards.

“What we need to see is inflation coming down in a clear and
convincing way,” Powell said in remarks to a Wall Street Journal
conference. “And we’re going to keep pushing until we see that.”

The Fed chair, who was confirmed last week by the Senate to a second
four-year term, suggested that the Fed would consider raising rates
even faster if price increases fail to moderate.

And he said the Fed “wouldn’t hesitate” to push its benchmark rate to
a point that would slow the economy if needed. While it is unclear
what level that might be, Fed officials peg it at about 2.5% to 3%,
roughly triple its current setting.

Powell’s remarks Tuesday followed other statements he has made that
have indicated the Fed is implementing a series of rate hikes that
could amount to the fastest tightening of credit in more than 30
years.

At a meeting earlier this month, the Fed raised its key rate by a
half-point — double the usual increase — for the first time since
2000, to a range of 0.75% to 1%. And at a news conference after the
meeting, Powell suggested that Fed officials would continue to raise
its rate by a half-point, at both its June and July meetings.

The Fed chair appeared unconcerned Tuesday about the stock market’s
sharp decline over the past six weeks. Those declines partly reflect
concern on Wall Street that the Fed’s efforts to rein in inflation,
which has reached 40-year highs, could weaken the economy so much as
to trigger a recession. Stock prices also often fall as interest rates
rise, increasing the return from bonds.

When asked if the Fed’s rate hikes could disrupt financial markets,
without necessarily bringing down inflation, Powell responded, “I
don’t see that happening.”

The interest rate, or yield, on the two-year Treasury note, has risen
steadily since the start of the year, which Powell pointed to as a
sign that Wall Street expects the Fed to keep tightening credit. Such
expectations should help slow borrowing and spending, and cool the
economy.

“It’s been good to see financial markets reacting in advance” of
upcoming rate hikes, Powell said. “That’s what we need.”

The S&P 500, a broad market index, has tumbled about 15% from its
January peak. That’s just short of the 20% decline that marks a bear
market. Yet many economists say Powell is unlikely to let market
disruptions change the Fed’s path, given that inflation has soared to
such high levels and is causing hardships for millions of households.

“The markets are orderly, they’re functioning,” Powell said. “There
are some volatile days and volatile markets, but so far, I see us as
getting through this fairly well.”

The Fed chair also suggested, more explicitly than before, that the
central bank’s efforts to bring down inflation may result in some
people losing their jobs, pushing up the unemployment rate.

Powell said the Fed’s goal was to cool off consumer and business
spending and bring it more into line with the restrained supply of
goods and workers. That, in turn, should tame inflation.

The Fed hopes to accomplish that, Powell said, while keeping the job
market strong. But that doesn’t mean the unemployment rate would
necessarily stay at 3.6%, where it is now, he said.

“You’d still have quite a strong labor market if unemployment were to
move up a few ticks,” he said.