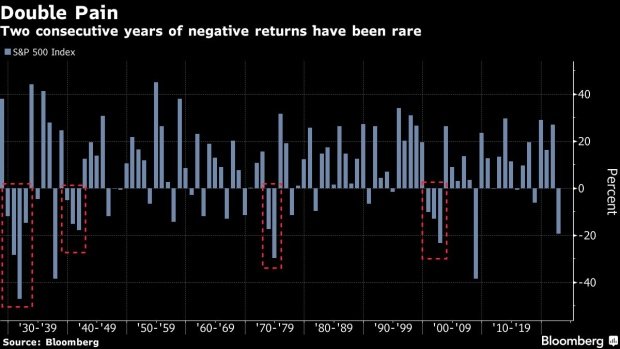 (Bloomberg) — There wasn’t much sunshine in the stack of Wall Street forecasts that predicted 2023 would bring a global economic contraction and rough going for risk assets. But as January trading picks up steam, a small cadre of optimists is breaking away from consensus and betting a soft landing can deliver market gains.

David Kelly, the chief global strategist at JPMorgan Asset Management, is betting that inflation will continue to ease in 2023, helping the US economy to narrowly escape a recession. Ed Yardeni, the longtime stock strategist and founder of his namesake research firm, is putting the odds of a soft landing at 60% based on strong economic data, resilient consumers, and signs of tumbling price pressures.

“If you talk to people, they say it’s the worst of all possible worlds,” Kelly said in an interview. “It’s not — inflation is coming down, unemployment is low, we are moving past the pandemic. The chances are risk assets are going to do very well.”

An almost 20% slump in global stocks last year has most analysts and investors erring on the side of caution, with the majority predicting that historically high inflation is here to stay and a recession is inevitable. Kelly, who thinks the Federal Reserve will wrap up its historic hiking cycle after the March meeting and start cutting rates in the fourth quarter, says the pessimism may provide good opportunities to buy US value stocks and investment grade credit at discounted prices.

Yardeni, who doesn’t rule out the possibility of a hard landing, sees opportunities in financial, industrial, energy and technology stocks that he says now look much cheaper than they did last year. The bonds of such companies may also perform well in 2023, he said.

“Optimists and pessimists agree that 2022 was a terrible year for stocks and bonds but it doesn’t go on forever,” Yardeni said in an interview. “The market has responded to the fact that inflation has turned out to be more persistent and the Fed to be more aggressive.”

Consecutive down years are very rare for the S&P 500, having taken place on just four occasions since 1928. Yet when they have occurred, drops in the second year have always been deeper than in the first, with an average decline of 24%. The average year-end target for the S&P 500 among strategists surveyed by Bloomberg in December was 4,078, which would imply a 6% gain for the index, though that largely reflects the big slump that took place at the end of the year. In November, the average forecast was for a decline.

Research from Bespoke Investment Group suggests year-end targets are usually about 5 percentage points off in either direction anyway. “We don’t generally do targets, just because we think they should be taken with a grain of salt,” said Bespoke co-founder Paul Hickey. “If there’s one thing I’ve learned through experience, it’s that when there is such widespread agreement on anything, things don’t usually play out as planned.”

Recession odds are ebbing in the credit market, where the gap between default swap spreads of high-grade companies and their junk counterparts has fallen more than 100 basis points since September. Known as “compression” in market parlance, it points to less fear that a sharp economic downturn will leave the weakest credits vulnerable to default. Even so, the measure remains above pre-pandemic levels.

A Bank of America measure of strategists’ sentiment seems to back up Kelly’s view that market consensus is too pessimistic. It has tumbled so much that it’s now signaling a return of around 16% in the next 12 months. The most important change that’s taken place since last year, he says, is that prices have fallen, creating opportunities “all over the place.” Index members in the S&P are trading at about 17 times projected 12-month profits, in line with its average reading this century.

“One resolution I’ve made at the start of 2023 is to avoid unreasonable gloom,” Kelly wrote in a note. “A new year, like a new baby, deserves to be greeted with optimism.”