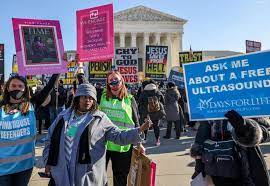 Many large US corporations have moved swiftly to provide support and
financial assistance to employees seeking abortions in states that
outlawed the procedure after the US supreme court’s decision on Friday
to overturn its landmark Roe v Wade ruling.

With potentially millions of women soon looking to cross state lines
for the procedure, many employers have added “critical healthcare”
packages to employees’ benefits packages.

The measures reflect, in some cases, elevated responsibility that
businesses now feel to respond to pressure from investors, customers,
and employees at a time when corporate values do not conform with the
legislatures of states in which they or their workers are based.

Many banks and tech firms have announced they will cover travel
expenses for US workers in need of abortions as part of their medical
benefits. After the reversal was announced Friday, Bank of America and
Goldman Sachs joined Citigroup and JPMorgan Chase in offering travel
benefits.

“We will continue to provide benefits that support our colleagues’
family planning choices wherever we are legally permitted to do so,”
Citi’s head of human resources, Sara Wechter, wrote in a memo to
employees on Friday.

Apple has said the existing benefits package allows employees to
travel out of state for medical care, and Facebook parent Meta has
said it will offer travel expense reimbursement “to the extent
permitted by law”.

In entertainment, Disney, Condé Nast, Warner Bros Discovery, and
Netflix are among those that have said they will offer travel
reimbursements.

While large companies can mitigate the supreme court ruling, the
measures may not address the concerns of employees at firms that have
in recent years located in low-tax states that have either enacted
restrictions or essentially banned access to abortion.

Texas, for instance, has been aggressively selling itself as a
low-tax- and low-regulation home to companies such as Oracle,
Hewlett-Packard, and Tesla. Facebook, Amazon, and Apple have all
increased their presence there.

But the commitment of Texas, like Missouri, to a near-total ban on
abortion, could now clash with those companies’ stated values and harm
the state’s ability to attract new business, employees, and
investment.

Earlier this year, Texas state representative Briscoe Cain sent a
cease-and-desist letter to Citigroup, saying he would propose
legislation barring localities in the state from doing business with
any company that provides travel benefits for employees seeking
abortions.

The St Louis mayor, Tishaura Jones, said in a post on Twitter that she
believes abortion bans at the state level are going to make it harder
to attract businesses. Kansas City mayor Quinton Lucas said one
business has already backed out of setting up in the city.

But many large companies have stayed silent, including McDonald’s,
PepsiCo, Coca-Cola, General Motors, and Arkansas-based Walmart – the
largest employer in the US with dozens of stores in states that have
enacted abortion bans.

The Business Roundtable, an organization that represents some of the
nation’s most powerful companies, has said it “does not have a
position on the merits of the case”.

Perhaps a more pressing concern is that for millions of people not
employed by a large international or national company, abortion
restrictions present a more onerous challenge.

According to the pro-choice Guttmacher Institute, abortion bans and
restrictions don’t reduce unintended pregnancy or demand for abortion.
Rather, they impose significant hurdles to obtaining care, causing
stress for people in need of an abortion and leading some to
experience forced pregnancy and all its troubling consequences.

“Evidence also shows the disproportionate and unequal impact abortion
restrictions have on people who are already marginalized and oppressed
– including Black and Brown communities, other people of color, people
with low incomes, young people, LGBTQ communities, immigrants and
people with disabilities,” Dr. Hermania Palacio, the institute’s
president, said in a statement.

In response, regional governments and community organizations have
started outreach efforts to help anyone in need of the procedure.
Baltimore’s mayor, Brandon Scott, has announced that the city will
provide $300,000 in grants to organizations that offer abortion and
family planning.

Some left-leaning states have seen abortion procedures increase as
surrounding states tightened access, even before Roe fell. In
Illinois, abortion increased by 25% between 2017 and 2020. Guttmacher
said in response “local and national abortion funds increased their
capacity and helped even more people pay for their abortions”.

But with an increasingly fragmented and increasingly polarized
abortion landscape, many companies are likely to find themselves
forced to respond to both pro-choice and anti-abortion activists while
promising to promote women’s equality and workplace advancement.

The issue of freedom to travel to other states for an abortion
procedure issue has one notable, anti-Roe supporter. In his concurring
opinion released Friday, Justice Brett Kavanaugh said it would be
unconstitutional for a state to impose travel restrictions. “In my
view, the answer is no, based on the constitutional right to
interstate travel,” Kavanaugh wrote.

… we have a small favor to ask. Millions are turning to the Guardian
for open, independent, quality news every day, and readers in 180
countries around the world now support us financially.

We believe everyone deserves access to information that’s grounded in
science and truth, and analysis rooted in authority and integrity.
That’s why we made a different choice: to keep our reporting open for
all readers, regardless of where they live or what they can afford to
pay. This means more people can be better informed, united, and
inspired to take meaningful action.

In these perilous times, a truth-seeking global news organization like
the Guardian is essential. We have no shareholders or billionaire
owners, meaning our journalism is free from commercial and political
influence – this makes us different. When it’s never been more
important, our independence allows us to fearlessly investigate,
challenge and expose those in power.