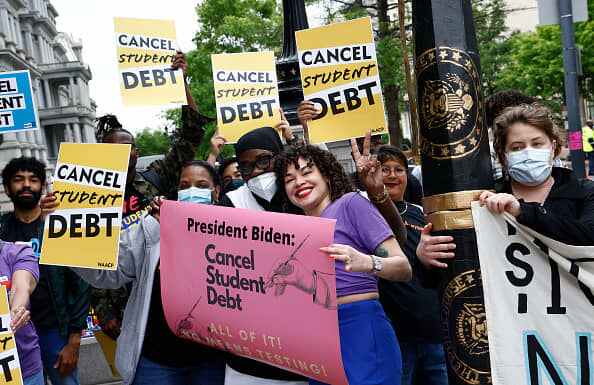 There was some rain on the parade of celebration of the student loan debt forgiveness. The Tax Foundation, perhaps with a touch of schadenfreude, announced that the forgiveness, while not federally taxable due to recent legislation, might be taxable in as many as thirteen states. They have taken a closer look and backpedaled quite a bit. It is now down to four states Minnesota, Mississippi, North Carolina, and Wisconsin and those are not for sure. This makes my revelation that there is likely another way out for many of the recipients of this boon less exciting,

Forbes Senior Contributor Adam S. Minsky gave a good rundown of the overall situation on August 29. He mentions the possibility of the insolvency exception, but has a lot more ground to cover and did not go into detail. Here is some detail.

The insolvency exclusion is Section 108(a)(1)(B) of the Internal Revenue Code. It provides that gross income does not include discharge income if – “the discharge occurs when the taxpayer is insolvent”. The exclusion that applies to student loans is way down at Section 108(f)(5). The student loan exemption is a better deal than the insolvency exception as it does not require a reduction of favorable tax attributes, but that might not be of much importance to most borrowers.

Normally you claim the insolvency exception by attaching Form 982 to your federal return which then requires you to allocate the reduction among favorable tax attributes you might have. For many people that might be none. The instructions refer you to Publication 4681 which includes a worksheet on Page 7 that you fill out to determine whether you are insolvent. You don’t need to attach the worksheet. Save it with your records.

How exactly you will claim the insolvency exception on a state return when you are not claiming it on a federal return remains to be seen.

How Common Is This Situation?

I only have anecdotal and speculative information to go on, but I am thinking that a very large number of the people who benefit from the reduction will still be insolvent afterward. In 2020 I took a pretty deep dive into student loans and debt forgiveness in this piece. If it was a movie I would have said it was based on or maybe inspired by a true story. None of the names are real. I gave Taylor, the debtor in the story a call to see how this might play out for them. I decided that Taylor was going to move to be in Mississippi. Taylor is twenty-something and ran up $60,000 getting a master that turned out to not be very lucrative.

We ran through the worksheet together. In addition to the remaining $50,000 in student debt, Taylor has about $1,100 in credit card debt. When it comes to assets there is $500 or so in the checking account, a car that might be worth $5,000, a couple of ancient laptops, and some clothes. Taylor couldn’t make it to ten grand soaking wets after a full meal. So Taylor is insolvent as are many of their compatriots. I would hazard a guess that many with better economic prospects than Taylor going into careers in medicine, law, and accounting are even more insolvent.

More To The Deal Than Immediate Forgiveness

I find it interesting that the $10,000 reduction in itself likely will not benefit Taylor at all. I used a simulator on the Federal Student Aid website as a crystal ball to see Taylor’s financial future. They could pay $777 per month and be done in May 2030. Or they could pay based on income with monthly payments projected to go from $174 to $235 and finish in May 2040 with a forgiveness of $105,344. Knocking $10,000 off would lower the payoff number some, but it would still be far above the income-based payment. The only thing that would be different with the income-based payment would be the amount of forgiveness in 2040.

There are two other features to the plan that will make a real difference to Taylor. The income-based repayment amount will be cut from 10% to 5% and the exempt non-discretionary income will be raised. Taylor’s payment will go down. In addition, interest will not exceed the income-based repayment, so the loan balance will not grow. So if Taylor begins to prosper later they will not have a mountain of debt to deal with from capitalized interest.