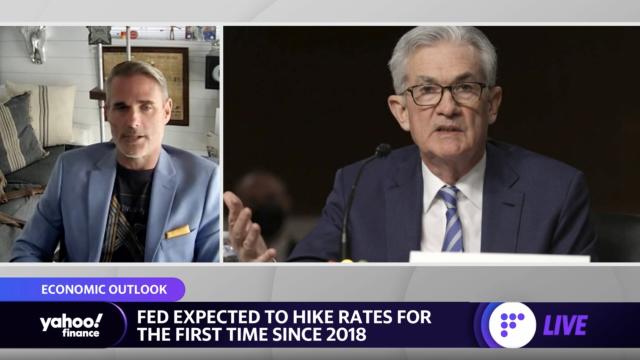 On Wednesday the Federal Reserve will likely take the first steps in paring back its stimulus — by raising interest rates for the first time since the global pandemic began.

High inflation makes it a near certainty that the central bank will move to “tighten” its policies of printing money, by raising the target federal funds rate (the benchmark for short-term interest rates) by 0.25%.

The uncertainty for Fed policy lies in how aggressive the central bank will move after the first interest rate increase. Concerns are building that the Fed may not be able to credibly bring inflation back down to its 2% level. Prices rose by 7.9% on a year-over-year basis in February, a 40-year high.

St. Louis Fed President James Bullard has advocated for raising interest rates four times by July. High readings of inflation into the summer this year will be critical to determining the pace of any rate increased, said Cleveland Fed President Loretta Mester in late February.

“If by mid-year, I assess that inflation is not going to moderate as expected, then I would support removing accommodation at a faster pace over the second half of the year.”

When the central bank’s policy-setting committee releases its statement, it will also release its quarterly “dot plot” chart showing each policymaker’s forecast for how many rate increases they expect over the coming years.

Americans remain worried about persistent inflation, which shrinks the purchasing power of their dollars as goods and services get more expensive. The New York Fed’s Survey of Consumer Expectations showed households projecting 6.0% inflation over the next 12 months, an increase between January and February. Over the next three years, households expect inflation to pace at 3.8% — well above the Fed’s target of 2%.

Complicating the picture on inflation is the Russian invasion of Ukraine, which could lead to higher prices due to the isolation of Russian gas and oil through international sanctions.

Higher energy prices — which are also bleeding into other corners of commodities markets — may make it more difficult for the Fed to pull off its massive effort to slow inflation.

On the other hand, the economic implications of hard sanctions make the default of the Russian economy a viable outcome. It is unclear if a Russian financial collapse would spill over to the United States, giving Fed officials reason to monitor the situation closely.

“The bottom line is we will proceed but we will proceed carefully as we learn more about the implications of the Ukraine war,” Fed Chairman Jerome Powell told the House Financial Services Committee on March 2.

The Federal Open Market Committee will release its policy decision and a set of quarterly economic projections at 2 p.m. ET on Wednesday, followed by Powell’s press conference at 2:30 p.m. ET.