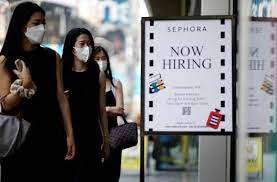 First-quarter GDP declined at a 1.5% annual pace, worse than the 1.3%
Dow Jones estimate and a write-down from the initially reported 1.4%.
The pullback in gross domestic product represented the worst quarter
since the pandemic-scarred Q2 of 2020.
Initial jobless claims totaled 210,000, a decline of 8,000 from the
previous week.

The U.S. economic contraction to start the year was worse than
expected as weak business and private investment failed to offset
strong consumer spending, the Commerce Department reported Thursday.

First-quarter gross domestic product declined at a 1.5% annual pace,
according to the second estimate from the Bureau of Economic Analysis.
That was worse than the 1.3% Dow Jones estimate and a write-down from
the initially reported 1.4%.

Downward revisions for both private inventory and residential
investment offset an upward change in consumer spending. A swelling
trade deficit was also subtracted from the GDP total.

The pullback in GDP represented the worst quarter since the
pandemic-scarred Q2 of 2020 in which the U.S. fell into a recession
spurred by a government-imposed economic shutdown to battle Covid-19.
GDP plummeted 31.2% in that quarter.

Economists largely expect the U.S. to rebound in the second quarter as
some of the factors holding back growth early in the year subside. A
surge in the omicron variant slowed activity, and the Russian attack
on Ukraine aggravated supply chain issues that had contributed to a
40-year high in inflation.

CNBC’s Rapid Update survey shows a median expectation of 3.3% growth
in the second quarter; the Atlanta Fed’s GDPNow tracker also points to
a rebound, but at a more subdued 1.8% pace.

“This year will be mixed. Declines should not be repeated, but growth
will not match what has been seen since the economy began reopening,”
said Scott Hoyt, senior director at Moody’s Analytics. “With the
Federal Reserve seemingly totally focused on bringing inflation back
down, recession risks are uncomfortably high, although perhaps more
for next year than this.”

One factor helping to propel growth is a resilient consumer fighting
through inflation that accelerated 8.3% from a year ago in April.

Consumer spending as gauged by personal consumption expenditures
increased by 3.1%, better than the first estimate of 2.7%. That has
come as the labor market has continued to be strong and wages are
increasing rapidly, though still below the pace of inflation.

Initial jobless claims for the week ended May 21 totaled 210,000, a
decrease from the previous 218,000, the Labor Department reported.

Continuing claims, after holding around their lowest level since 1969,
edged higher for the week ended May 14 to nearly 1.35 million.