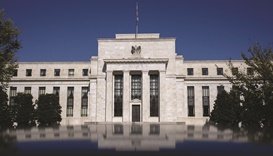 A shift is underway at the Federal Reserve in how to describe neutral — the interest-rate level that neither stimulates nor restrains growth — as it debates how much higher to hike.

For an abstract concept — neutral can’t be directly measured — the stakes are high: If the assessment is too low, Fed policy could be providing more stimulus to the economy than thought as it fights inflation. If it’s too high, the policy is more restrictive than planned. Both can result in a damaging policy error.

The topic is moving up the policy agenda because, in July, the Fed raised the top of its target range for the benchmark federal funds rate by 75 basis points to 2.5%, which Chair Jerome Powell noted met officials’ estimate of the long-run neutral rate.

That move completed the first stage of the tightening cycle that began in March when policymakers said they wanted to get to neutral “expeditiously” to cool surging inflation.

With officials beginning stage two of the campaign — as Powell laid out Aug. 26 in Jackson Hole, Wyoming — the discussion has turned to how much higher they now have to go and how long to stay when they get there.

That’s also elevating the argument that neutral is currently higher than the Fed’s long-run median estimate — which in June was 2.5% — indicating rates need to be hiked further than otherwise. Powell has said that another unusually large increase could be on the table when officials next meet on Sept. 20-21, depending on the data, and some policymakers want to see rates rise above 4%.

But estimates of neutrality can vary widely. Just 39% of economists surveyed by Bloomberg in August agreed with the FOMC’s view of neutral at 2.5%, with estimates ranging from 2% to 3.75%.

And it’s a hard thing to talk about.

Powell was slammed for announcing after the July 27 rate increase that the move had lifted rates into the range of neutral. Critics argued the comment had fanned a rally in stocks as investors took it as a dovish hint that rates didn’t have much higher to go.

Former Treasury Secretary Lawrence Summers, a paid Bloomberg TV contributor, said the remark was “indefensible” because 2.5% was not anywhere near neutral given current high inflation. Mohamed El-Erian, the chief economic adviser to Allianz SE and a Bloomberg Opinion contributor, said “the zip code for neutral is above where we are now,” and at least 50 basis points higher.

“There certainly seems to be a slight shift in where the Fed thinks the current ‘restrictive’ threshold would be. Powell’s Jackson Hole speech said clearly that 2.5% would be far short of where ‘restrictive’ would be given high inflation today.”

St. Louis Fed President James Bullard, among the most hawkish at the US central bank, says the 2.5% estimate might make sense if the economy were on the balanced growth path with 2% inflation projected ahead — conditions contrary to the post-Covid-19 reality.

“That is not where we are today,” Bullard said in an Aug. 26 Bloomberg TV interview at Jackson Hole. “We’ve got all this inflation and we’ve got a very strong labor market. So that’s why it makes sense to go well above that to a recommended policy rate that’s well above that.”

San Francisco Fed President Mary Daly said neutral is “around 3%” and she’d like to get to a “restrictive” rate of more than that to push against demand. “We need to bridle back the economy a bit,” she said in an Aug. 18 interview with CNN International.

Neutral estimates are much less than inflation of 6.3% as measured by the Fed’s preferred gauge. Consumers expect 4.8% inflation over the next year and 2.9% over five to 10 years, according to the University of Michigan’s survey.

For a business, that could make taking out a loan look like a bargain relative to inflation, therefore stimulating growth.

“The current level of rates is not at neutral given the configuration of inflation expectations,” said Roberto Perli, head of global policy research at Piper Sandler & Co. “That’s why the Fed thinks it has to keep tightening.”

Fed officials, taking their lead from Powell, have spent most of the year talking about getting rates to neutral as fast as possible and being deliberately vague about what happens next. That’s created a communication challenge.

“I think right now we are still in a somewhat accommodative state,” rather than neutral, Atlanta Fed President Raphael Bostic told Bloomberg TV at Jackson Hole.

Fed officials are already re-framing how they talk about neutrality. During the July meeting, some participants commented that short-term neutral may be higher than their long-run estimate, according to the minutes of the gathering.

Most Fed leaders have suggested they would be willing to err on the side of too-tight policy to ensure bringing down inflation and avoid an undesirable rise in inflation expectations that could be hard to reverse later on.

Some Fed officials have also begun talking more about “real rates” — or interest rates compared to inflation. Fed presidents Thomas Barkin of Richmond and Loretta Mester of Cleveland have both called for rates to move up so that real rates are positive — largely accomplished now.

Even so, the neutral issue is thorny enough that Bostic said his head of research, David Altig, has urged him to avoid talking about it.

“The neutral language becomes a sort of confusing and not all that useful,” Altig said in a telephone interview. With short-term inflation, neutrality is higher in the current environment. “The focus should not be arguing over numbers,” he said.