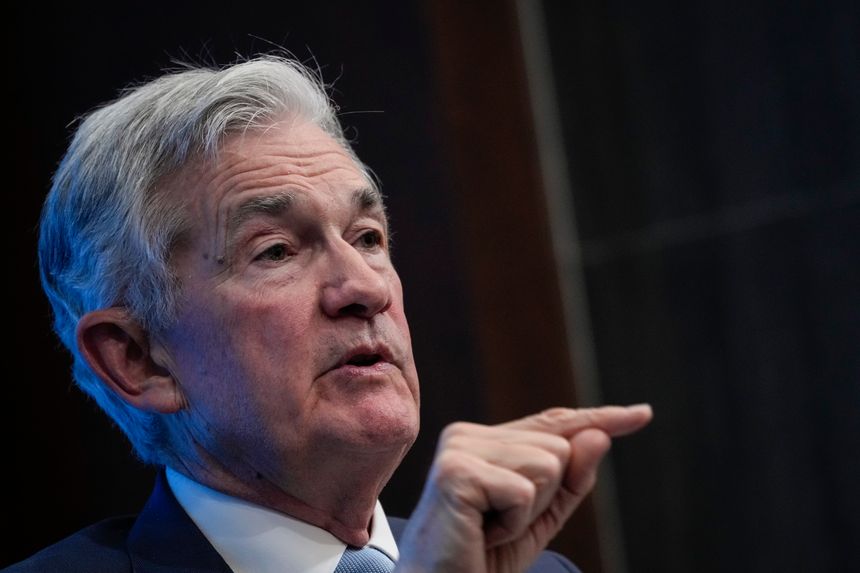 Brisk wage growth may lead officials to consider raising the policy rate above 5% in 2023 while approving a 0.5-point increase in December

Federal Reserve officials have signaled plans to raise their benchmark interest rate by 0.5 percentage points at their meeting next week, but elevated wage pressures could lead them to continue lifting it to higher levels than investors currently expect.

They have raised rates this year at the fastest pace since the early 1980s, including by 0.75 points at each of their past four meetings to combat inflation. Fed Chair Jerome Powell indicated last week that the central bank was prepared to downshift the size of rate increases at its coming meeting on Dec. 13-14.

A smaller 0.5-point increase would mark a new phase of policy tightening as they calibrate how much higher lift rates. Policymakers expect price pressures to ease meaningfully next year, but brisk wage growth or higher inflation in labor-intensive service sectors of the economy could lead more of them to support raising their benchmark rate next year above the 5% currently anticipated by investors.

They want to guard against raising rates too little and allowing inflation to resurge, or raising them too much and causing unnecessary economic weakness, according to recent public comments and interviews.

Because it takes time for interest-rate changes to slow the economy and even longer to influence inflation, “if you’re waiting for actual evidence that inflation is coming down, it’s very difficult not to over-tighten,” Mr. Powell said last week. “We think that slowing down at this point is a good way to balance the risks.”

Markets rallied after Mr. Powell’s comments last week, with some investors interpreting them as a shift from comments he made this past summer and fall. He has told associates that he hasn’t changed his view that the bigger mistake the Fed could make would be to fail to get inflation under control.

A 0.5-point rate rise this month would bring the benchmark federal-funds rate to a range between 4.25% and 4.5%, the highest level since December 2007.

The Fed’s preferred inflation gauge, the personal-consumption-expenditures price index, rose 6% in October from a year earlier. The Fed targets 2% inflation over time.

Officials will see another inflation reading on Dec. 13, the first morning of their two-day meeting, when the Labor Department releases the consumer-price index for November. Signs of continued strong price pressures could lead more of them to consider raising rates by 0.5 points at consecutive meetings this month and in February.

Officials could signal a slightly more aggressive rate outlook in their new quarterly economic projections to be released after the coming meeting. Those could show that policymakers expect to keep raising rates in at least quarter-point increments until they see clear signs that the labor market has cooled.

Most officials in September penciled in rates rising to between 4.5% and 5% next year. That landing zone could rise to between 4.75% and 5.25% in the new projections.

“Stronger demand for labor, stronger demand in the economy than I previously thought, and then somewhat higher underlying inflation suggest a modestly higher path for policy relative to September,” said New York Fed President John Williams, a top adviser to Mr. Powell, this past week. “Not a massive change, but somewhat higher.”

Officials are likely to debate next week how much to raise rates in February, with views shaped by how they see underlying price pressures. If inflation slows but the labor market stays tight, they could be more divided over how to proceed.

Some officials could seek to push through another half-point rate rise in February because they see a greater risk that inflation won’t decline enough next year. Without signs of slower hiring, they could worry that inflation could pick up again.

Others see inflation as being driven primarily by supply bottlenecks and an overheated housing market. They think that as activity cools and supply-chain woes ease, inflation will rapidly decline and be closer to 2% in the coming year, and they would prefer a quarter-point rate increase in February.

Some of these officials have indicated that they might oppose another 0.75-point rate rise this month. Fed policymakers agreed unanimously to the previous three increases of that size.

Kansas City Fed President Esther George has advocated for slowing the pace of rate increases but said this past month that the central bank needs more signs of economic weakness before it can debate when to pause. “This would not really be the time to begin to speculate about that because you don’t have much evidence yet that you are beginning to make the kind of progress that I think we’d want to see,” she said in an interview this past month.

Mr. Powell said it is hard to judge how high rates need to rise to slow the economy because of post-pandemic difficulties forecasting inflation, supply bottlenecks, and shifts in demand.

“We have a broad set of thoughts about where that destination might be, but we could be wrong,” he said last week during an event at the Brookings Institution in Washington, D.C. “We’ll have to see.”

He outlined two possible strategies for proceeding. One would be to quickly raise the fed-funds rate well above the 5% level broadly anticipated in financial markets and then lower it right away if it turns out they have gone too far. Another would be to “go slower and feel your way a little bit to what we think is the right level” and then “hold on longer at a high level and not loosen policy too early.”

Mr. Powell said he favors the second course. “We wouldn’t just raise rates and try to crash the economy and then clean up afterward. I wouldn’t take that approach at all,” he said.

The labor market remains a source of concern because officials are worried that rising prices could be sustained by continued income growth and strong demand for workers. They are uneasy because even if corporate hiring executives and workers expect high inflation to subside over the next few years, employees could demand and receive bigger raises that keep paychecks and prices rising in lockstep.

“When people start saying, ‘Well, I know you’re going to bring inflation back down to 2%, but right now it’s 7%, and I need a 7% raise just to keep up.’ And then the firm says, ‘Well, I can’t eat that. I’ve got to pass that through to my customers,’ you start building this in,” Fed governor Christopher Waller said this past month. “And that’s where things get out of control.”

Mr. Powell said last week that wage growth had been running around 1.5 to 2 percentage points too high. “We want wages to go up strongly, but they have got to go up at a level that is consistent with 2% inflation over time,” he said.

He made his comments two days before the Labor Department reported that hourly earnings growth increased in November at its strongest pace since January.

Mr. Williams, the New York Fed president, said last week that he expects the unemployment rate, at 3.7% this past month, to rise to between 4.5% and 5% next year, up from an earlier projection of around 4.5%. “There is a path where unemployment peaks at around 4.5% if things go well if inflation turns,” he said. But “it could be that it has to be higher” if inflation doesn’t cooperate, he said.

Fed officials’ recent comments suggest “they now understand they have got to get a…significant rise in unemployment to make sure wages aren’t an inflation problem,” said Ethan Harris, head of global economics research at Bank of America.

Officials are speaking subtly about those objectives, Mr. Harris said, because “the Fed doesn’t want to come out and say, ‘We let things run too hot, and now we’re going to fix it.’”