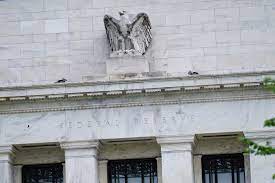 Last week, the Federal Reserve raised its benchmark overnight interest
rate by three-quarters of a percentage point – its biggest hike since
1994 – to a range of 1.50% to 1.75% and signaled its policy rate would
rise to 3.4% by the end of this year.

Markets quickly priced in even more aggressive rate hikes, with
interest-rate futures reflecting expectations for a policy rate of
3.5%-4% by year-end. A stream of analysts and at least one former Fed
policymaker raised the alarm on recession risks.

But on Friday, fresh data from the University of Michigan showed
longer-term inflation expectations had not broken above their recent
range, as a preliminary reading out just before the Fed’s June
policy-setting meeting had suggested.

Fed Chair Jerome Powell had cited the initial read of 3.3% — a
possible early warning that months of 8%-plus consumer price inflation
were beginning to undermine public faith in the Fed’s ability to
contain price pressures — as one reason policymakers supported the
big rate increase in June.

San Francisco Fed President Mary Daly on Friday said she would still
have supported a 75 basis point hike in June even had she known the
revised 3.1% figure.

And she believes another 75 basis point interest rate hike will be
needed next month, with further increases to follow to deal with
prices pressures that in her view probably have not peaked.

Daly’s remarks are particularly striking because she is not known as
an especially hawkish policymaker. She said that by year-end rates
should get to 3.1%, her view of a neutral level, though if inflation
worsens the Fed may need to do more.

Speaking earlier in the day, St. Louis Fed President James Bullard
said the Fed must “act forthrightly and aggressively to get inflation
to turn around and get it under control,” repeating his call to
frontload hikes to bring inflation down to the Fed’s 2% target.

Bullard since last summer has been one of the Fed’s most vocal hawks.

Both Daly and Bullard expressed confidence the Fed will be able to
avoid recession, citing the strength of the labor market and the
economy’s momentum, helped by excess household savings that Daly said
had not been spent down as quickly as she forecasted.

Interest rate futures traders pared their expectations for Fed rate
hikes and though they continue to price in a 75-basis point hike in
July, ended the day reflecting expectations for a year-end Fed policy
rate of 3.4%, exactly what Fed policymakers’ own forecasts suggest.